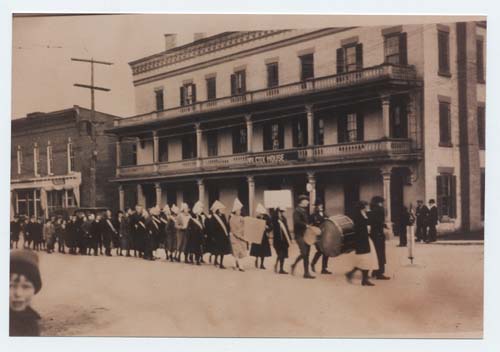 Suffragists (women and a few men working for women’s right to vote) were innovators in the use of public space and getting attention at a time when mass consumerism and advertising were beginning.

Newspaper hats worn in the parade above are an example of their creativity. It was also a popular time for paper hat making. Some people made paper hats out of paper crepe (a special kind of paper), which made for a cheaper hat then the expensive ones. Some paper stores sold these or instruction books. Also, people in newspaper rooms wore newspaper hats! They did this to protect their hair from ink that would splatter when the printing presses were run. Printing technology was very important. From the end of the 1700s, it provided a way for women to have a voice and access to political and general news.