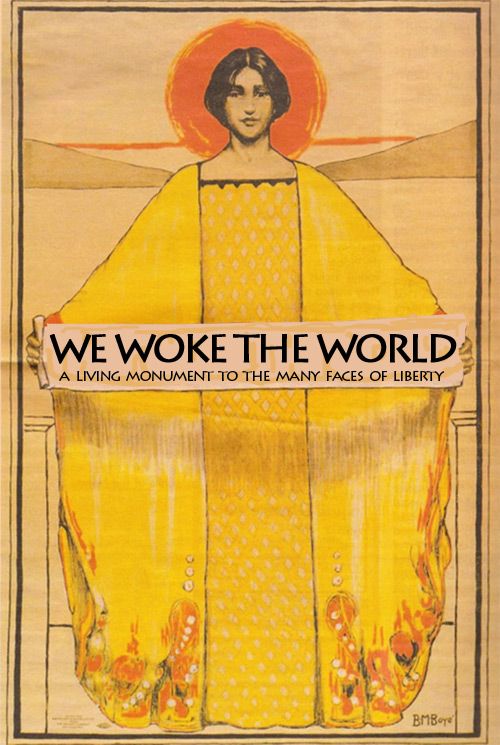 The 19th Amendment, which established women’s right to vote in the United States, is one of the greatest uses of the first amendment freedom to assemble peaceably in America. On August 26, 2012, the 92nd anniversary, we gathered at the Riverside Art Museum for a sing-a-long and live recording of a 1917 group song as well as a historical phrygian paper hat making activity to celebrate this history.

The 1917 group song marks a pivotal turning point in the century long struggle for liberty leading to the 19th amendment, which established women’s right to vote in the U.S. It also tells a unique story about the women’s suffrage movement, which is the first successful nonviolent campaign for social change in U.S. history.

The song for the sing-a-long is called “We Worried Woody Wood.” It was written in 1917 while the suffragists were in prison for assembling peaceably in front of the white house, quoting from President Woodrow Wilson’s speeches. They were sent to jail but refused bail stating they had done nothing wrong and accepting bail would mean they were accepting the legitimacy of their arrest. The suffragists also began a hunger strike. These non-violent methods were pioneered by British suffragists and served as the tactical example of non-violence for Gandhi, who had theorized about non-violence but hadn’t identified specific methods.

While in prison the suffragists were severely mistreated including being force fed and beaten. One suffragist was knocked unconscious. During this time, the prisoners wrote a song. At night they would add a stanza highlighting an event from that day and they would sing the song to the accompaniment of a hair comb.

The goal is for this “seed recording” to serve as a foundation for future components of the living monument. This includes inviting elected officials and the general public to add their voice to the sing-a-long and make a small donation. In the process, the living monument raises money to develop engaging education and community programs and events that explore the many faces of liberty through the lens of the century long suffragist movement.